In 2021, Addsfit massage guns will be all the rage. Massage guns are all the rage in 2021, with models available in a variety of forms and sizes to help with muscular stiffness, blood flow, and rehabilitation after a workout. For the uninitiated, they can appear menacing, especially since most of them resemble a power drill.

Premium products such as Theragun charge around £500/$500 for the Theragun Pro, which is typically a barrier.

There are, however, more budget-friendly solutions. Addsfit claims to provide the same core massage sensation for a fraction of the price, with the Addsfit Mini retailing for £77/$105. 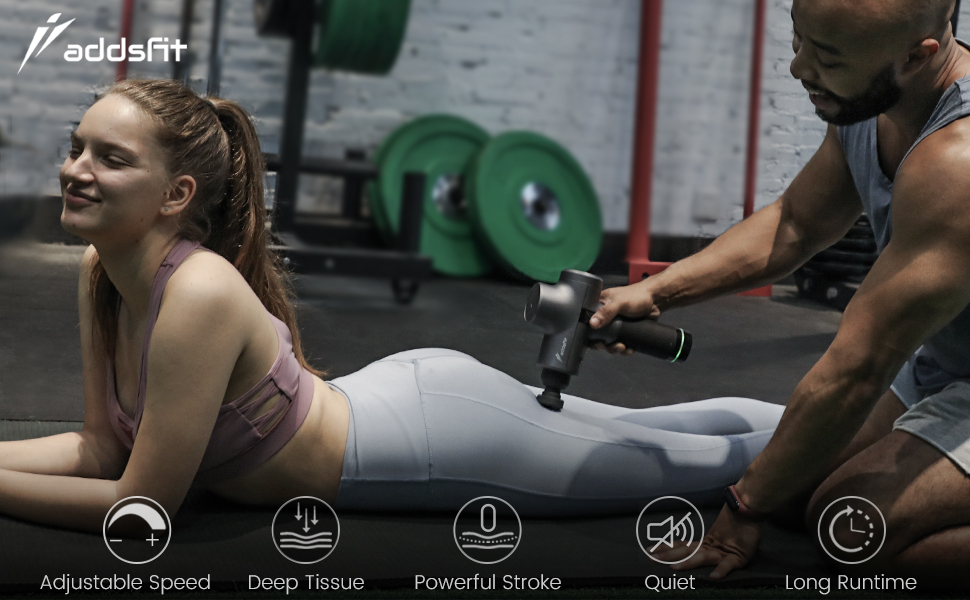 The Mini is smaller than most massage guns, including Addsfit's larger Max and Theragun's Elite, as the name implies. It is incredibly light, measuring 129 x 40 x 104mm and only 360g. That means it'll fit easily into a pocket or knapsack, making it ideal for gym visits - whenever they become a thing again, that is.

Its drill-like form factor may appear frightening, yet it's simple to hold in various positions, allowing you to reach those hard-to-reach areas on your body. It's not as simple as Theragun's distinctive triangle-shaped grip, though.

The body is made of aluminum, and there are just two attachments included. Whereas many competitors utilize a softer head, Addsfit chose pure aluminum to “resist any germs that tries to cling to the surface.” However, because aluminum lacks antibacterial characteristics in general, the effect is likely to be small — it's likely simply a fancy way of saying, "it's simple to wipe down." 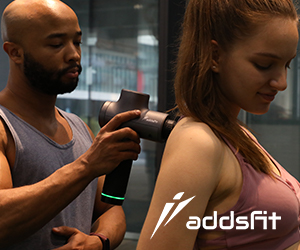 As you might expect, the material choice results in a firm massage, especially when combined with the more powerful thumb-like massage head at a higher power setting. The flatter, rounded head is less intimidating, and you'll probably use it the majority of the time — it's designed for broad use in all muscle groups across the body, whilst the other is for smaller muscle groups.

There are three rpms to chose from when it comes to power levels: 1600, 2500, and 3000rpm, which are all controlled by a single button on the massager's bottom. Other guns feature + and – buttons, but the + and – buttons are on the bottom, so you won't accidently increase the power in the middle of a massage.

The range isn't as extensive as the competition, with the Sportneer K1 Mini having five settings up to 3500rpm for a similar price, but you don't need a lot of speeds: you just need effective ones.

Given the large difference in rpm between the three settings, it should be evident which power mode you've chosen, but there's also a strip of LEDs on the bottom to indicate which mode you're in. However, you won't be using these because they're only useful at the highest setting.

That's because, with a 6mm amplitude, it doesn't pummel your muscles like a powerful massage pistol would. The distance the attachment moves in and out is measured in amplitude, and it's a long way from the 16mm you get with a Theragun.

It's not enough to be a good deep tissue massage therapist: you must also be a good listener. Deep tissue work, according to Theragun, requires a precision of 16mm.

What this implies is that the Mini vibrates your skin rather than delivering fast bursts of intense pressure to your muscle tissue.

That may not be a deal breaker for the normal user looking to loosen up muscles after a long day at home, but it isn't ideal if you want to concentrate on deep tissue. That's when investing in one of the most capable massage pistols on the market can be worthwhile. Furthermore, if you think you can merely press harder to obtain a stronger effect, the Mini will just stop moving, with a maximum force of only 27 pounds.

During my testing, I was mostly using it to enhance recovery during warmups and after workouts, rather than for deep tissue or a specific ailment that I wanted to address.

The flat, circular head was, as expected, the more useful of the two, providing a smooth, comfortable experience almost anywhere with muscle, though the downside is that you'll occasionally hammer a bone – it wouldn't be so bad if it were made of a softer material, but the aluminium can cause some discomfort if you, for example, catch your spine while doing your neck and shoulders. In certain cases, it's probably best to enlist the assistance of someone else. (The Sportneer's Y-shaped attachments come in handy here as well.)

The Mini is claimed by Addsfit to be quiet enough to use during conversations and video chats, however this is just not the case. Even at its lowest setting, it's audible, and at its highest setting, you'll be able to hear it from the next room. It's not a really bothersome noise, but it's far from silent.

When it comes to battery life, Addsfit promises that the 2,500mAh battery will last 400 minutes before requiring a USB-C recharge, albeit that is likely at the lowest power setting — the battery will drain faster as the power is increased.

The Addsfit Mini is kept in a zip-up hard-shell case with cut-out slots for the massage gun, two attachments, and a pocket for the USB-C charging wire when it's not in use. It's a useful feature to have because it allows you to put all of your accessories and charging wire in one place, ready to use.